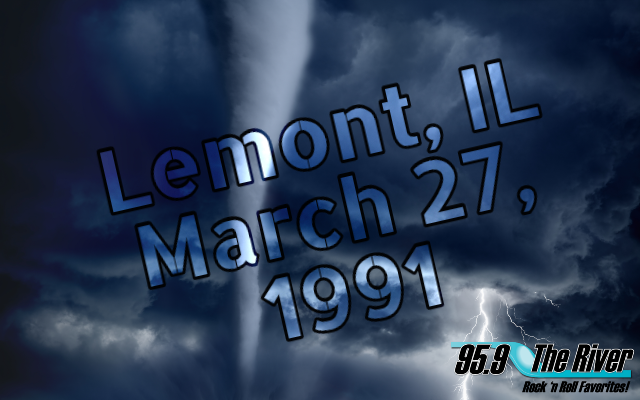 Today marks 30 years since an F-3 tornado carved a path through Lemont. I was seven years old and lived on Cass St. at the time and had just come home from school before the siren went off. I remember the day. My father nearly pushed my brother and me down the stairs into our basement as he stood at our door watching outside (which is certainly not advised, but we all do it!).

It was a rough two years in terms of weather. Just a year earlier an F5 tornado devastated Plainfield killing dozens and injuring hundreds. Thankfully, the Lemont tornado of 1991 didn’t kill anyone (unlike the twister in ’76), but about a hundred homes were destroyed which is enough for people who lived there to remember it!

It was a defining time for me as it instilled a healthy fear of storms! Then in 1992 I watched a WGN tornado documentary from my hero Tom Skilling called It Sounded Like a Freight Train. I learned so much about tornadoes and severe weather from that program, and it started a lifelong interest understanding how weather works…something I continue to pursue. Fear really only lives when there is a lack of understanding, and Skilling’s program is what started to replace my fear of storms with an understanding of how they work!

Here’s footage of the 1991 Lemont Tornado:

Here’s the story of how Lemont reacted to the tornado that lives in the memories of all that lived in town at the time, as remembered by Bob Porter and shared on the Longtime Lemonters Facebook group.

While having a sandwich at Nicks today some guy mentioned the tornado in Lemont past. Time has eroded the memory of the two tornadoes of Lemont. The first one came in 1976 and second one came in March 27, 1991. It was the second one that really caught all by surprise as tornadoes normally don’t appear in the early Spring. I think a Snippet on the 1991 tornado is in order for it’s 30th anniversary.

What do you remember from that tornado? Our new residents and local government leaders in the past 30 years have not had to experience this type of damage. Few of the recovery players are still around. Age, retirement, moving away and passing of death have dented our experienced folks for this type of emergency. Lemonters will regardless step up and help no matter what if such an emergency should again occur. Our Emergency Management group now have training for these types of disasters.
A formal disaster plan was approved years ago by the village and township governments.