Nashville – Not Just for Country Lovers 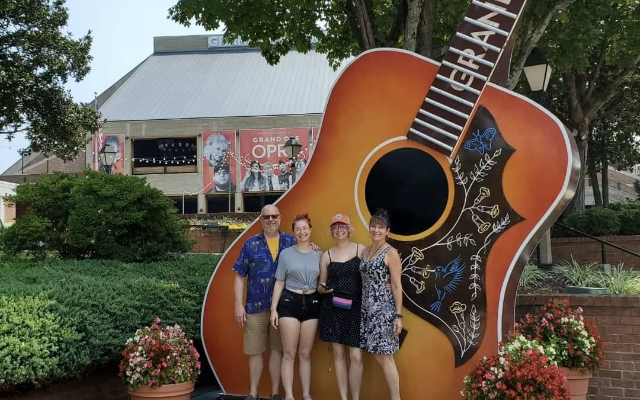 Hey there, Leslie Harris back from a really fun vacation in Nashville.

Now I know Nashville is known for country music, and honestly, I do not like country music in spite of the fact that my first professional job was withUS99, but my family and I had a great time, and didn’t even get to see all of the things we wanted to.

It’s good to keep in mind that rock and roll has its roots and country, and that music is music. I didn’t know what to expect from our tour of the Grand Old Opry. Honestly, it reminds me of Minnie Pearl and Hee Haw which I hated as a kid. My dad loved it, and I remember thinking it was so stupid it was, but the comedy was just part of that.

As a music lover, I can appreciate that the soul of country music lives in the Opry. The tour includes several video clips of musicians being invited to become members. Each and everyone of them got choked up, but none more than Darius Rucker. (Hootie and the Blowfish) Pretty sure he started crying even though he hid his face when they invited him after his performance. The tour guide told us that Darius’ plaque is always smudged because every time Darius comes to the Opry, he touches his name because he still can’t quite believe that he’s a member, in spite of the fact that he’s been a member for 5 years.

The Ryman Auditorium also has a rich tradition of country music, but has pivoted a lot of that to rock and roll. Rock performers include Foo Fighters, Bruce Springsteen, Sheryl Crow, Eddie Vedder and Jack White. There are also lots of cool artifacts on display at the Ryman, including the TalkBack pedal that Peter Frampton used on Frampton Comes Alive! By the way, both Peter Frampton and Jack White have homes in the Nashville area.

Other highlights included the Johnny Cash Museum, The National Museum of African-American Music, which has some great displays about Motown, Jack White’s Third Man Records, and Hatch Show Print, where they have been making iconic, handset and hand printed posters for more than 140 years.

We were in Nashville for almost 6 full days, and could have spent a couple more. So if you like country music, you’ll probably want to spend even more time there. A good time was had by all!