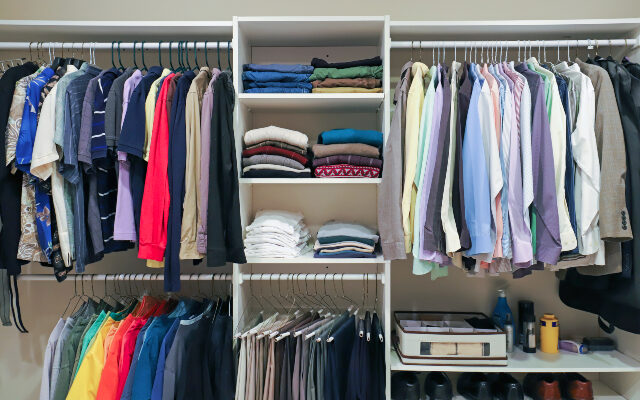 I’m glad people out there have time for this type of thing, because I sure don’t: Some guy who’s WAY too into spreadsheets tracked his entire wardrobe for THREE YEARS to figure out what he really NEEDS.

He broke everything down by “cost per wear.” That’s the price you pay for something, divided by the total number of times you’ll wear it. Here are nine tips he came up with to make your wardrobe more efficient, and save money long-term . . .

1. Only buy what you need AND love. Before you buy, ask yourself if you’ll still love the item in two months. The goal is to have a closet filled with ONLY your favorite stuff.

2. Focus on use, not price. Expensive clothes might actually be cheaper long-term if they’re higher quality and last longer. For example, he looked at two pairs of sneakers he had. And the pricier ones were actually cheaper on a “cost per wear” basis. They lasted longer and he wore them more.

3. Avoid clothes with limited options. Like a bright purple shirt that you’d only wear with a specific pair of pants. Stuff like that doesn’t get used nearly as much.

4. Maximize compatibility. Look for versatile stuff that goes with ANYTHING in your wardrobe. The easiest way to do it is by limiting your color palette. But that might be too boring for some people.

5. With really expensive stuff, make sure you’re truly committed. If you buy a $400 coat and wear it for the next decade, it’s not that expensive. So just ask yourself if you’re really going to commit to something like that long term.

6. Take good care of your clothes. And don’t throw stuff out if you can fix it. If you only have clothes you really love, then you’ll WANT to keep them. And something simple like having a zipper replaced can double the life of a jacket.

7. Set your dresser or closet up so your clothes look good. When things look nice, we tend to appreciate them more. When you just shove stuff in a drawer, you subconsciously start to devalue it in your own head.

8. Know when to let stuff go. Don’t feel like you have to duct tape your clothes together to get another year out of them. If you’ve had something for a while, you don’t have to feel guilty about replacing it.

9. It’s okay to have weaknesses. Even the guy behind this has one. He calculated that he has enough blazers to last at least 10 years. So they shouldn’t be taking up so much space in his closet. But he loves blazers, so he’s fine with it.