A Memorial Ceremony Fit for a Soldier 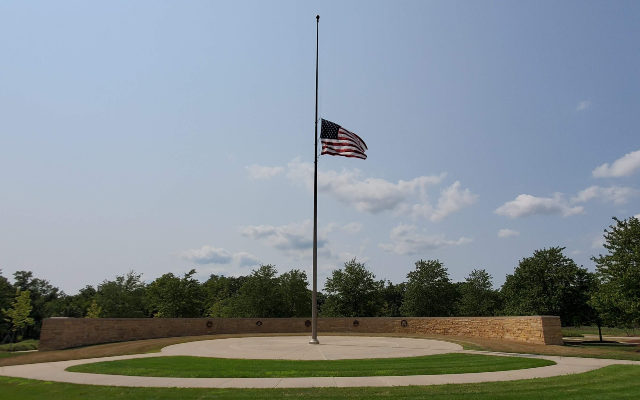 Thanks to Terry Dean for filling in for me yesterday as my family mourned the loss of my grandfather Richard J. Jakusz, Sr. He was a soldier who earned a bronze star for his service in Korea.

Big Boppa actually passed away back in April. He had been of declining health for a while and went to the hospital for his kidneys. Unfortunately, he contracted COVID-19 and passed away, unable to fight it off. It’s been rough, knowing he was suffering and there was nothing any of us could do about it.

We were finally able to have some semblance of a funeral on Monday with a small morning visitation, a socially-distanced mass, during which I read the Prayers of the Faithful while choking back tears (I’m a crier) and my voice rising to frequencies I didn’t know it could.

After the mass was a small lunch for the family at the Lemont VFW where we were greeted by the Illinois Patriot Guard. The motorcycle group then led us from Lemont to Abraham Lincoln National Cemetery in Elwood with an assist from the Will County Sheriff’s Office who blocked off each intersection as we processed. This was the most touching part of the day as random people stopped on the side of the road, some getting out of their cars completely, to stand at attention or saluting as my grandfather drove past…or so I’m told. I actually left the lunch a bit early to make sure I knew where to go to set up the live video stream at the cemetery!

The day ended with a short ceremony at Abe Lincoln National Cemetery, a gorgeous piece of land in Elwood, south of Joliet, where thousands of veterans are laid to rest. It’s our own local Arlington. The ALNC Memorial Squad fired 21 shots, Taps played, and the Army’s honor guard presented the flag.

The ceremony starts about halfway through the video.

A sendoff he rightfully earned.