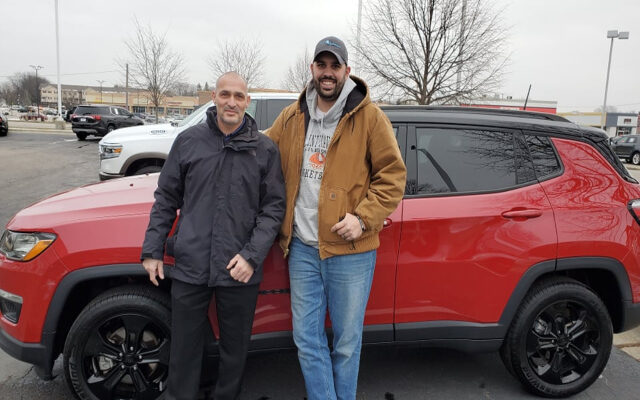 I’ve been driving the same 2005 Honda Civic for a LOOONG time. To be honest, I didn’t take the best cosmetic care of it. It was a nice car that got me from A to B and didn’t suck on gas, so there was no reason to get rid of it.

Until last week. The transmission started slipping. Lights on the dash came on. I promised I’d drive the thing until the wheels fell off, and damn it, I did that!

When it became evident that I would need to get something new there was only one place I needed to go: my buddies at Naperville Chrysler Jeep Dodge Ram.*

I really wanted to get into one of their Wranglers they have on the lot, but alas, it was a tad outside of this radio professional’s price range. They did however have this sharp Jeep Compass sitting just outside the front doors!

It might not be Jeep’s top-of-the-line model — like the Grand Cherokee L’s NCJDR has in stock or the new Wageoneers, those are sweet! — but it was certainly an upgrade for me. And the best part, the price they sold it for was nearly $2,000 less than anywhere else I looked, getting a “great deal” tag on Cars.com.

Couldn’t be happier with my experience and I feel good about where I spent my money.

*Let it be known I am a paid endorser of Naperville Chrysler Jeep Dodge Ram. That doesn’t mean, though, I needed to spend my money there. I endorse them because I believe they are a top notch shop that treats people right. And there coffee is really good!