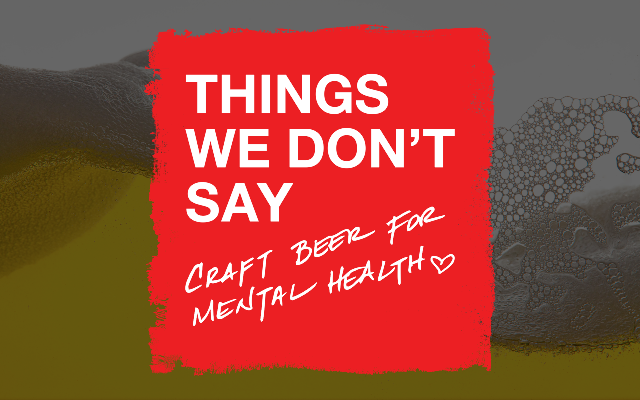 It’s called The Things We Don’t Say IPA. This beer is not just for your taste buds, but also to spark conversation and get people talking about things that are not comfortable talking about.

Before we talk about the beer, let’s mention why it’s coming to fruition. The goal is to raise awareness of the good work that Hope for the Day is doing, specifically their mental health education program called — wait for it! — Things We Don’t Say.

It’s also very important to use the right sources to find help for yourself or a loved one.
PRO TIP: It’s not Google. If you are looking for mental health help, please click here!

THINGS WE DON’T SAY IPA is a call to empower breweries from around the globe to use their platforms to stand up for those who suffer in silence with their mental health, be it with anxiety, depression, or other mental illness.

Named after Hope For The Day’s flagship mental health education curriculum, THINGS WE DON’T SAY IPA is a 6% IPA being released in May 2021, in conjunction with Hope For The Day’s Shake The Stigma awareness campaign for Mental Health Month 2021.

Much like the “Black is Beautiful” beer campaign, the recipe for Things We Don’t Say IPA was developed at one location (Eagle Park Brewing in  Wisconsin), but it is available publicly for any brewery willing to support the cause. Breweries all over the country, and even a few internationally, have hopped on (see what I did there?) to join the movement.

Here’s another kicker: there will be a non-alcoholic version!! I LOVE THIS! Sometimes you want a beer, but the situations doesn’t call for imbibing. Wellbeing Brewing makes great NA beers, and they have jumped on to support this cause and make this beer! Very, very cool!

Expect these beers to start making appearances in May.

Brewers who wish to make this beer can get the recipe (which they are allowed – nay, encouraged! – to twist and make their own), art work, and other essentials here.

I imagine many lives have been changed from meaningful and impactful conversations had over a pint of beer. It only makes sense that there is now a beer who’s sole existence to spark those very conversations.