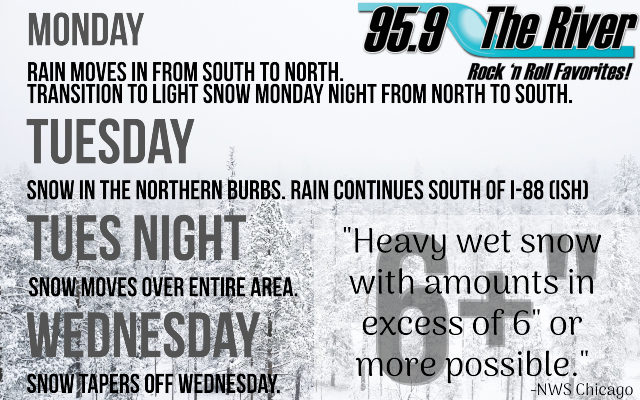 We haven’t had much in the way of snow storms, so to say it’s the “biggest one of the season” isn’t saying much, but it should be a pretty significant event for most of us!

Judging by all the models and graphics coming out of the National Weather Service in Chicago, the heaviest of the snow will be in our northern areas (north of I-88 for the most part), although there is talk about the area of snow shifting south.

You see, accurately forecasting exact snow fall totals and where they will occur is EXTREMELY difficult, especially more than 24 hours before the storm. Honestly though, it doesn’t matter what the exact numbers are. What matters is that we know we could see a lot of heavy, wet snow and that we are prepared for it.

Winter Storm Watch in effect Tues AM through Wed afternoon. Watch has been expanded, and includes city of Chicago. pic.twitter.com/U6zci89BQz

As far as timing goes, we will likely see some rain today…that will start in the south and work northward. Then tomorrow, the cold will slide from north to south, changing the rain to snow. Most of the snow will fall Tuesday afternoon into Wednesday afternoon, with rates as much as 1″ per hour!

Bottom line: be smart. Be prepared. Let’s act like we’ve been here before…because we have!