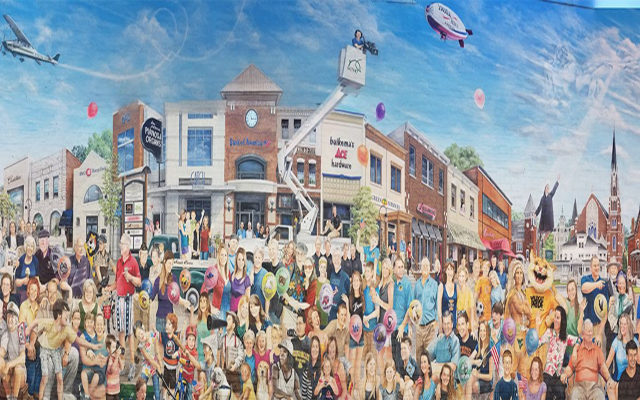 Century Walk is a 501(c)(3) nonprofit organization dedicated to bringing public art to Naperville, adding to the beauty of the town and building community. It’s mission is simple: “To create significant and diverse public art throughout Naperville in the 21st century.“

The recent events in Naperville the last few days have brought to the attention of Century Walk a petition that has been circulating on social media about the lack of diversity displayed in the “Naperville Loves a Parade“ Mural. While not as inclusive of as many ethnicities as people might wish, we believe that it is inclusive as to the artists that created this public art starting in 2011 as well as the subject people (over 300) and the 80 plus businesses portrayed.

Our three artists are gender and ethnically diverse, hailing from the Czech Republic, Philippines and the United States. So too are 32 people painted on the wall: Korea, Pakistan, Colombia, Mexico, Japan, the Philippines including African Americans numbering six in total.

Also represented in this unique public art are other nationalities such as Italian, Irish, Polish, German, Hispanic and Native American. This is true as well for the businesses represented who are owned by many ethnicities as well.

We would also call attention to other nationally known artists who have created art in our 50 location collection that are of other ethnicities such as Emmanuel Martinez, Giorgio Gikas, and African-American artists Shirley McWhorter – Moss and Faith Ringgold.

Most recently in 2017 we dedicated five ceramic murals entitled “Streaming History” at the Water Street Project, two of which specifically call attention to diversity as our community has grown. See www.centurywalk.org

We have constantly involved our populace in our 25 years of creating public art and intend to continue to do so. We understand and respect the richness growing diversity adds to our community. Inclusion of all interests is something we will continue to focus on as we move forward with the city’s recently created task force.

We invite all residents to engage with us as we pursue our mission to bridge generations by paying permanent artistic tribute to almost 200 years of Naperville history through a diverse collection of murals, mosaics, sculptures and more.

When asked specifically if they will make any additions to the mural, the response from the Naperville Century Walk’s Facebook page was, “At this time, it is too early to make a decision.”

We have an active poll, as unscientific as it is, gauging where people stand on the topic. Feel free to add your thoughts with respectful conversation!