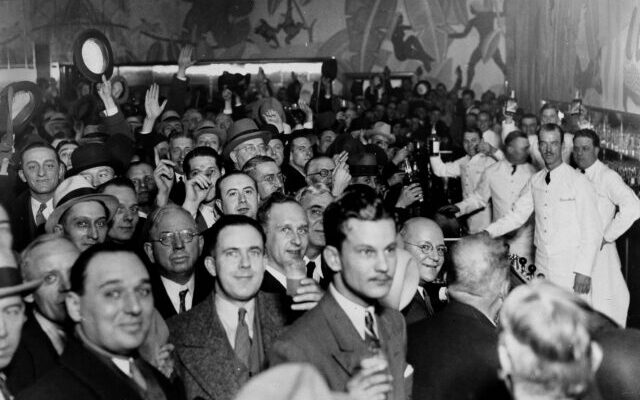 Crowds jam a downtown Chicago bar as word came from Utah that prohibition has been repealed, Dec. 12, 1933. Before the scramble for a legal drink, the crowd tossed a few hats in the air and let loose a round of cheers. (AP Photo)

It was this day in 1933 that Prohibition came to an end! It was 5:32 p.m. exactly, if you are looking for a good time to take a sip this afternoon!

It was then that the state of Utah became the 36th state to ratify the 21st Amendment.  That one repealed the ridiculous 18th Amendment that had outlawed all booze for nearly 14 years!

To date, this is the only time in American history in which a constitutional amendment was passed for the purpose of repealing another!

You know you’re an alcoholic when you’ll pass an AMENDMENT TO AN AMENDMENT just to get a drink.

You can read more about all that non-sense from back in the day here, from History.