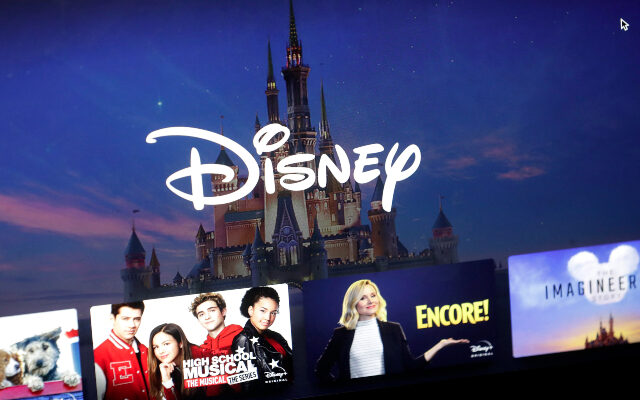 A Disney logo forms part of a menu for the Disney Plus movie and entertainment streaming service on a computer screen in Walpole, Mass., Wednesday, Nov. 13, 2019. Disney Plus says it hit more than 10 million sign-ups on its first day of launch, far exceeding expectations. (AP Photo/Steven Senne)

2.  There are 10 new “Star Wars” series and 10 new Marvel series coming to Disney+ in the coming years.  The “Star Wars” shows include “Lando“, but there’s no word if either DONALD GLOVER or BILLY DEE WILLIAMS will be involved.

And even though you already knew EWAN MCGREGOR was starring in an “Obi-Wan” series, you didn’t know THIS:  HAYDEN CHRISTENSEN will return to play Darth Vader, in what Lucasfilm is calling “the rematch of the century”.

There are also two “Mandalorian” spin-offs, including one focusing on ROSARIO DAWSON’s character, “Ahsoka”.

3.  Some new Marvel movies were announced . . . including yet another attempt to make the “Fantastic Four” happen.  The guy who does the new “Spider-Man” movies is making it.

They also confirmed that CHADWICK BOSEMAN will not be recast in “Black Panther 2”. . . the movie will focus on the other characters, and it’s coming in July of ’22.

4.  CHRIS EVANS is the new Buzz Lightyear.  He’ll take over for TIM ALLEN for a standalone origin film.

Pixar will also make a “Cars” spinoff series for Disney+ . . . as well as a show called “Dug Days”, centered on the dog from “Up”.

Speaking of characters getting their own spinoffs . . . that’s happening for Moana, Tiana from “The Princess and the Frog”, and Baymax from “Big Hero Six”.

Disney+ is also getting “Disenchanted”, with AMY ADAMS returning for the sequel to her movie “Enchanted”.

6.  One last note . . . Disney+ is upping its subscription price by a dollar in March.