Enjoying the Sun with My Son in My Old Hometown 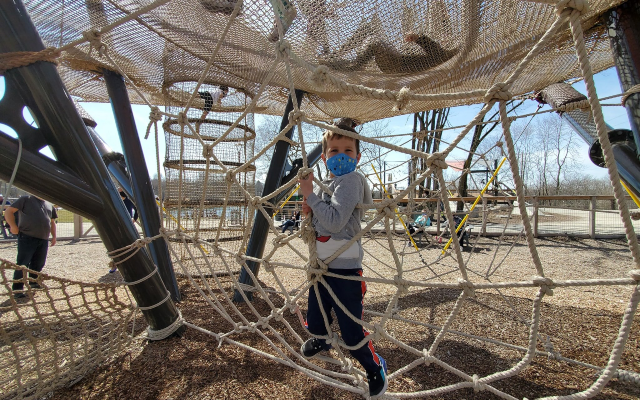 I don’t know why, but I feel like we earned this kind of start to Spring. Part of me hopes we don’t pay for it later…but I’ll take it right now!

My wife and daughter were at a ladies-only party yesterday, so I had the chance to spend the entire day with my five year old Max! I decided to take him to my hometown of Lemont where we spent the entire day outside.

I got him a pass to the kids’ area of The Forge: Lemont Quarries, but before we got there, I had to show him a special place that I spent a fair amount of time when I was a kid growing up just down the block. It’s an area affectionately called The Bowl. Lemonters know what’s up.

Then we made our way down to the quarries where The Forge adventure park is located. It’s quite the impressive (and sometimes controversial) recent addition to the town, but I think it’s awesome. Most of the climbing towers and zip lines aren’t open for the season yet, but the kids area called Twin Towers is!

I’ll tell you what…Max had a blast!

You get about an hour before they have to clear it out, sanitize and usher in the next group. We enjoyed some snacks by the quarryside, but Max wasn’t yet done! He wanted to find another park with “swings and slides,” so I took him to another spot where I spent a lot of time when I was a kid. It’s officially called Virginia Reed Park, but if you are from there, you know it as The Train Park…because there’s a train in it. It’s not the same train as there was 25 years ago…but a train nonetheless!

It was a super fun and meaningful day for me…a chance to show my son a fun afternoon outside in a town that means a lot to me because of the time I spent there when I was his age. We both enjoyed the day for very different reasons. It remains a great community to raise a family and the best town around in my humble opinion.