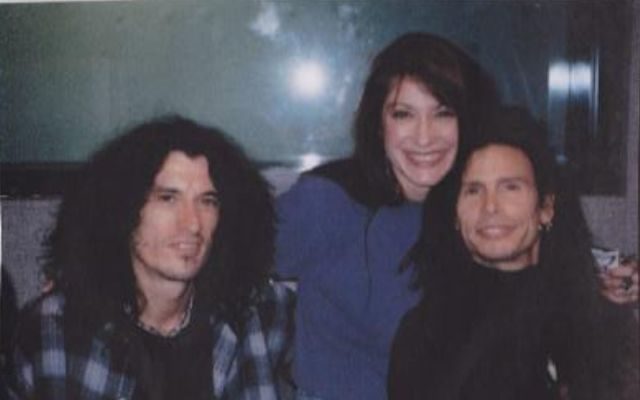 Hi it’s Leslie and by now you probably know by now that I’m a crazy cat lady, but I am also a crazy Aerosmith lady!

I have loved Aerosmith since I was 14 , and my love for them just continues to grow. I’ve actually met Steven Tyler a couple of times, and yes, he really is as nice as he seems. The photo you see with Steven, Joe Perry and myself was taken when I worked at Rock 103-5 in Chicago.

In addition to singing he also plays the harmonica, the piano, and he’s quite a good drum player as well. I’ve seen him play Wipeout at Aerosmith concerts.

Steven’s Father, Victor Tallarico, was a Juilliard-trained classical musician, and Steven spent much of his childhood playing under his dad’s grand piano, citing that experience as his earliest musical influence. Steven wrote the song Dream On before Aerosmith was even formed.

In 1969, Steven went to see a show in Sunapee New Hampshire, which is the first time he met guitar player Joe Perry and bass player Tom Hamilton, who we’re playing in a band called the Jam Band. Around 1970 the three of them decided to form their own band, along with Joey Kramer on drums and Ray Tabano playing rhythm guitar. Ray Tabano was soon replaced with Brad Whitford, and those five guys are still together

Steven also loves motorcycles, and has had his name on Red Wing Motorcycles and Dirico Motorcycles. If you do an internet search for “Steven Tyler Motorcycles” you’ll see dozens of photos of Steven on some sweet bikes.

A very happy birthday to my favorite rockstar, to the man who brings so much happiness to myself and so many of my friends and fans across the globe, Steven Tyler!