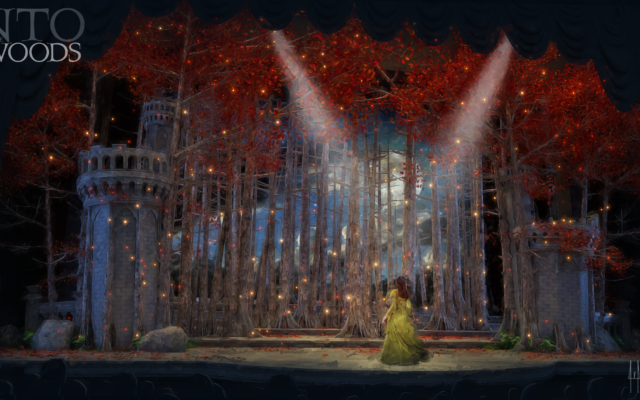 Once upon a time…it all started with a wish.

And sometimes, wishes do come true, because up next in Paramount Theatre’s 2022-23 Broadway Series is Into the Woods, Stephen Sondheim and James Lapine’s brilliant reimagining of the Grimm Brothers fairy tales, February 1-March 19, 2023.

Venture into the woods with the Baker and his wife on a mystical journey to collect a red cape, a strand of yellow hair, a golden shoe and a white cow to break the spell cast by the Witch. Encounter Little Red Ridinghood searching for bread to feed her grandmother. Join Jack on his adventure up the beanstalk to save his cow Milky White. Attend the King’s festival with Cinderella and her stepsisters. Discover Rapunzel locked away in a high tower. Come experience Into the Woods, but be aware, ever after isn’t always happy.

Paramount’s staging of one of the most astounding and original fairytale retellings theatre has ever seen will be co-directed by Artistic Director, Jim Corti, and Associate Artistic Producer and Casting Director, Trent Stork. Corti, responsible for Paramount hits like Newsies, The Producers, Sweeney Todd and Les Misérables, remains Chicago’s only theater artist to have won Jeff Awards as an actor, choreographer and director. Stork is still riding high after earning their first Jeff Award for Director-Musical-Large for mega-staging last season of Paramount’s Kinky Boots.

If you’ve seen The Little Mermaid, Beauty and the Beast or Cinderella on Paramount’s stage, then you know the spectacle and extravagance that awaits audiences who come to downtown Aurora for an unforgettable adventure Into the Woods.

Single tickets are $28 to $79. Three-show 2022-23 subscriptions including Paramount’s current production, The Sound of Music, Into the Woods and School of Rock are still on sale, starting at just $51. For group discounts, contact Melissa Striedl, [email protected] or (630) 723-2461.

Paramount Theatre is located at 23 E. Galena Blvd. in downtown Aurora. For tickets and information, visit paramountaurora.com, call (630) 896-6666, or stop by the Paramount box office Monday through Saturday, 10 a.m. to 6 p.m. Note: Into the Woods is suggested for ages 12 and up for violence and loud noises.

Paramount’s Into the Woods: Behind the scenes

“Paramount consistently delivers on what is loved about the great shows we select each season and Into the Woods will be no different. We also seem to have a knack for the unexpected – rediscovering what has always been there with a new relevance and emotional impact,” said Jim Corti, co-director, Into the Woods. “For as fantastical as this storytelling is, and however stunning its aesthetic, it’s the humanity of this piece that will linger with you as you travel home. That’s the thing about Sondheim. He’s telling the story of our lives and always beautifully. “

“This production is packed cover to cover with world class talent. These actors are simply the perfect cast to bring Sondheim’s profound words to life on our stage for our audience,” added Trent Stork, who is co-directing Into the Woods with Corti. “Like our story, however, the opportunity to see them ‘is not a lengthy visitor.’”

The cast features Natalie Weiss as the Witch. Weiss replaces Stacie Bono, who withdrew from the production after accepting a role on Broadway. Weiss made her Broadway debut understudying the Menonettes in Everyday Rapture. Other career highlights include swinging the National Tour of Les Misérables and performing in the second National Tour of Wicked (Ensemble, Elphaba u/s). She is featured on the soundtrack for The Greatest Showman and can be heard on the original Broadway cast recording of Dear Evan Hansen. Weiss was also an American Idol Season 4 Semi-Finalist.

Into the Woods features music and lyrics by Stephen Sondheim, book by James Lapine, and orchestrations by Jonathan Tunick. It debuted at San Diego’s Old Globe Theatre in 1986 and premiered on Broadway on November 5, 1987, where it won three major Tony Awards (Best Score, Best Book, and Best Actress in a Musical for Joanna Gleason), in a year otherwise dominated by The Phantom of the Opera (1988). The 2014 Disney film adaptation, directed by Rob Marshall, grossed over $213 million worldwide, and received three nominations at both the Academy Awards and the Golden Globe Awards.

Paramount is offering two Pay What You Can performances of Into the Woods:

Paramount will offer open and closed captioning on Wednesday, March 15, at 7 p.m.

The performance on Friday, March 17, at 8 p.m. will be interpreted in American Sign Language.

If you require wheelchair or special seating or other assistance, please contact the box office at (630) 896-6666 or [email protected] in advance.

Paramount Theatre’s Covid-19 commitment to and safety and protocol

Paramount Theatre has followed, and will continue to follow, the requirements of the State of Illinois and the Kane County Health Department. Therefore, Paramount is following the guidance of the State of Illinois and recommends, but no longer requires, masks, proof of vaccination or negative COVID test for patrons. Mask wearing is strongly encouraged, but will be optional. For complete details, please read Paramount’s full Covid Policy.