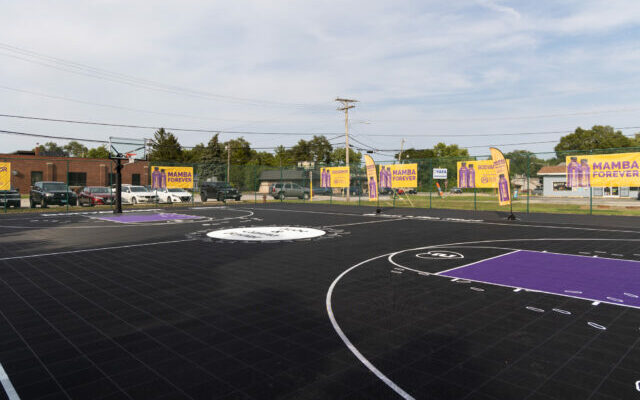 Thanks to funds from the Mamba and Mambacita Sports Foundation and other donors, kids in Joliet have a brand new basketball court to play on!

The court at Nowell Park is one of just 10 such court makeovers happening across the country to honor Kobe Bryant and his daughter Gianna.

The courts feature a purple and gold color palette, a nod to Kobe’s time with the L.A. Lakers. The numbers 8 and 2 are above the keys, the numbers Kobe and Gianna wore on their jerseys. The center circle reads “Kobe & Gianna Bryant.”

The court was designed by Venessa Bryant and features the Chicago skyline in both lanes as well the the footprints marking where Kobe and Gianna made memorable shots in their careers.

The court is also emblazoned with BodyArmour banners, a company in which Bryant was a heavy investor and is now owned by Coca-Cola, which is helping to fund the court refurbishing projects nationwide and honor the memories of Kobe and Gianna by empowering the next generation of athletes and providing access to youth sports.

A tip-off party and ribbon cutting was held on Friday. Here are a few more pictures!