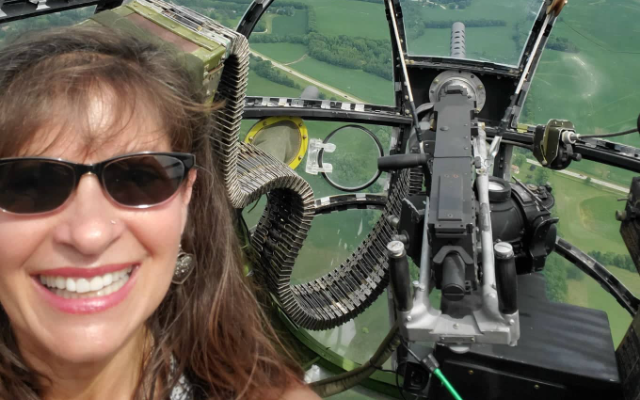 Hi this is Leslie Harris, and aviation is in my blood.

My mother told me that when she was a little girl she wanted to be an aviatrix. (I love that word!) She would chase airplanes as they flew overhead, and her mother even took her to meet Amelia Earhart. She got her pilot’s license, became a flight attendant and after I was born became a reservation agent for a major airline. Yep, I was an airline brat.

So when I got an email invitation to fly on the WWII B25 Mitchell, of course I jumped at the chance! Nick Jakusz and I went on a flight this past Thursday, and it was one of the coolest things I’ve ever done. There were only about eight of us on board. It was extremely loud, but so thrilling.

At one point, Nick disappeared through a tiny tunnel to the nose of the plane. I was further back and didn’t see how he got there, but when he came out, he had to slide through on his back! I was able to crawl through on my hands and knees, (in a dress!) and what a glorious sight! The photo on this blog was from the nose.

The B25 is managed by the Experimental Aircraft Association in Oshkosh Wisconsin. Their goal is to keep this piece of history in the air and out of a museum.

It’s in town today and tomorrow. Find out more information about air and ground tours by calling 920-379-4244.

See the video that Nick created of our experience HERE

Mom would have been so excited for me. I know she was with me.