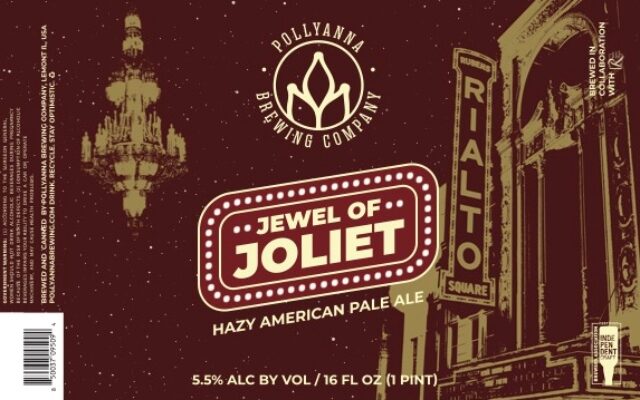 Much to the delight of the midday host on 95.9 The River (that’s me!), the craft beer offerings are expanding at downtown Joliet’s Rialto Square Theater!

The theater, which is approaching it’s 100th anniversary, has been nicknamed the “Jewel of Joliet” due to it’s beautiful architecture, construction, and the “Duchess” – an eight-armed, 200-fixture, crystal chandelier that hands in the rotunda, which appears on the label art.

The Jewel of Joliet beer is a hazy American pale ale with a 5.5% ABV…perfect for sipping while enjoying a show!

I love the label art, as well! The folks at Pollyanna mentioned it was a request of Rialto collaborators to include the chandelier on the label. The name of the beer is encircled by marquee-style lights, a nod to the theaters twinkling façade.

It’s not the ONLY locally brewed craft beer you can enjoy at the Rialto! You can also get a Pilcher Pale Ale or Stateville Stoute from MyGrain Brewing, also in downtown Joliet!