It was certainly one of the more popular stories on our website this year: Lockport approving the construction of a new ice arena featuring what will become the world’s largest hockey stick!

The home of the CURRENT world’s largest hockey stick is in a town called Duncan on Vancouver Island, pretty much as far west as one can go in Canada.

I decided the people of Vancouver Island should know that our fair city of Lockport will be taking the honor of being the home of the world’s largest hockey stick sooner rather than later, so I decided to share our story on a few of their local Facebook groups! 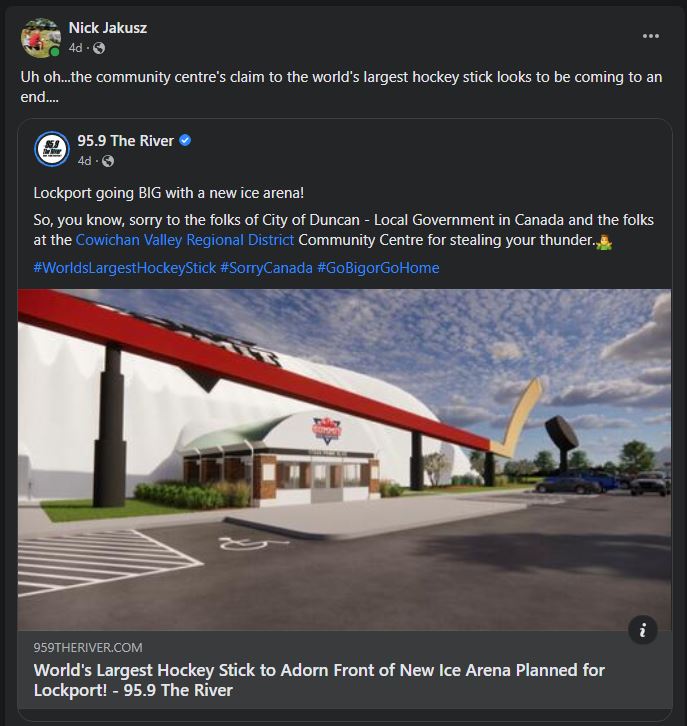 Much to my surprise, I got a phone call yesterday from our GM that a reporter from CTV was looking to talk to me about it!

Later yesterday afternoon I hopped on a Zoom call with Brendan Strain, a reporter for CTV Vancouver Island and we chatted about why the heck Lockport is doing this and the reaction of the community, which has been overwhelming positive.

Not only did I get to brag on Lockport a bit, but I mentioned that this hockey stick wasn’t the only “world’s largest” object in our backyard making the news lately.

I’m ecstatic that Lockport is getting some good publicity, and I’m very much looking forward to the ice arena being built!