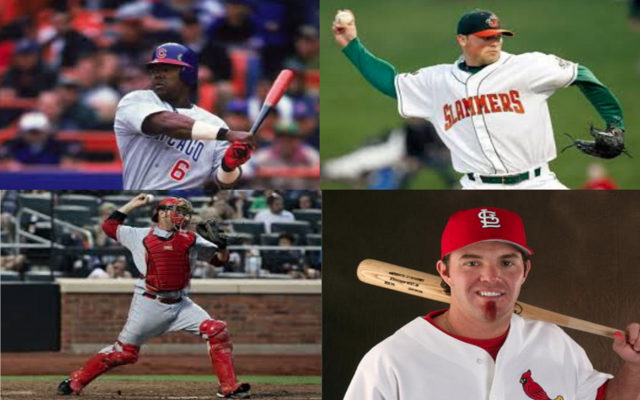 Photo used with permission from the Joliet Slammers.

Last week I told you about how the Joliet Slammers, in spite of everything going on, is bringing baseball to downtown Joliet (even though the league they play in – the Frontier League – cancelled their season).

Here’s the link to that story for a refresher on the creativity involved!

In a nutshell: The Frontier League cancelled their season, but the Slammers still wanted to play, so they are just creating three new teams from scratch and will play a four-team mini-season with the players who otherwise wouldn’t be playing! Pretty neat! Tickets are on sale now, by the way.

What else is cool is who the Slammers have managing these four teams!

Billy Petrick, a former Chicago Cub and native of Morris, Illinois, will join the City of Champions Cup as the Joliet Slammers Manager.  Petrick was a third round pick of the Cubs in 2002 and made his MLB debut with the team in 2007. Petrick previously pitched for the Joliet JackHammers, and was the opening night pitcher in the Joliet Slammers inaugural season in 2011 and a Frontier League Champion with that Slammers team.

Scott Spiezio, a 2 time World Series Champion and native of Morris, Illinois will also join the City of Champions Cup as a team manager. Spiezio played baseball at Morris High School before attending the University of Illinois where he made the All-Big 10 Team in 1992 and 1993. He was drafted by the Oakland Athletics in 1993 and made his MLB debut with them in 1996.  Throughout his career he was known as a utility player, playing both infield and outfield positions. In 2002 he won his first World Series with the Anaheim Angels. After making a stop with the Seattle Mariners, he would win a second World Series ring with the St. Louis Cardinals in 2006.

Corky Miller, a former MLB catcher for the Cincinnati Reds, Minnesota Twins, Boston Red Sox, Atlanta Braves, and Chicago White Sox, will be the third team manager in the City of Champions Cup. Miller signed with the Cincinnati Reds as an undrafted free agent in 1998 and made his MLB debut in 2001 with them. Miller’s No. 8 jersey was retired by the Louisville Bats, the Reds AAA team, after he set the franchise record for games played. Miller works in the Reds organization as a coach.

Glenallen Hill, a former MLB outfielder with the Toronto Blue Jays, Cleveland Indians, Chicago Cubs, San Francisco Giants, Seattle Mariners, New York Yankees, and Anaheim Angels, will be the fourth manager in the City of Champions Cup. Hill, most famously known in Chicago for his rooftop homerun shot, won a World Series in 2002 with the Yankees. In recent years he has served as a coach in the Colorado Rockies organization, serving as the Rockies first base coach from 2007-2012 before managing their AAA team from 2013-2019. Hill’s son, Glenallen Hill Jr., an Arizona Diamondbacks prospect, will also play in the City of Champions Cup.

Safety measures will be in place like capacity restrictions and mandatory masks (until you are seated) .Be safe and have fun!