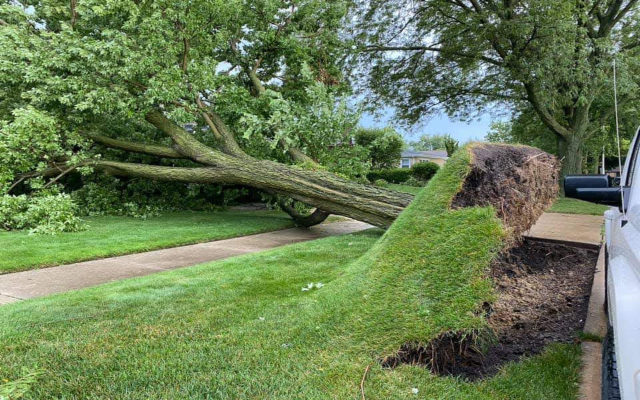 I’m trying to remember a storm quite like the one we had on Monday. One as large, with straight-line winds approaching 90mph, with as much wide-spread destruction and now a confirmed 11 tornadoes!

We know, we’re still talking about the derecho. We’re now up to 11 tornadoes across northern Illinois from the event are are still investigating a few more areas. You can read up on all the new details on our webpage:https://t.co/AZJonw6Ykq pic.twitter.com/FFQDVQBI0s

Using debris patter analysis, the National Weather Service has confirmed that of the 11 tornadoes in the Chicago metro, four were in our listening area including Yorkville-Plainfield, Ottawa, Wheaton and Lombard.

Here two of them mapped out…the Plainfield tornado sliding by less than a mile from my house!

We confirmed an EF-1 tornado with peak winds of 105 mph, path length of 14.5 miles, and max width of 250 yards started on the south side of Yorkville and moved southeastward into the far south side of Plainfield. Damaging winds of 70-80 mph continued into Crest Hill. #ilwx pic.twitter.com/eOZOaoodIi

We confirmed a brief EF-1 tornado with maximum winds of 100 mph and path length of 0.75 miles impacted the north side of Ottawa during the 8/10/2020 derecho event. #ilwx pic.twitter.com/UjpboF7Mfu

We continue to assess where there may have been embedded tornadoes (11+ in northern IL) within broader severe winds. We work w/ emergency management and other safety partners during the survey process, analyzing damage, photos, and radar, and apply conceptual storm understanding. pic.twitter.com/4V9xM1fub6

I also think this makes it clear why so many people are still without power and ComEd is having to work so hard. The number of individual instances of damage and the immense area this storm covered make it a nightmare on the power grid. Give those folks time as they continue to work night and day to restore power!

I have to commend the meteorologist who accurately predicted this event! I actually left the office early on Monday to get home and prepare for the storm. I’m glad I did too, as I had just finished clearing my patio before almost being knocked over by the first gust of wind.