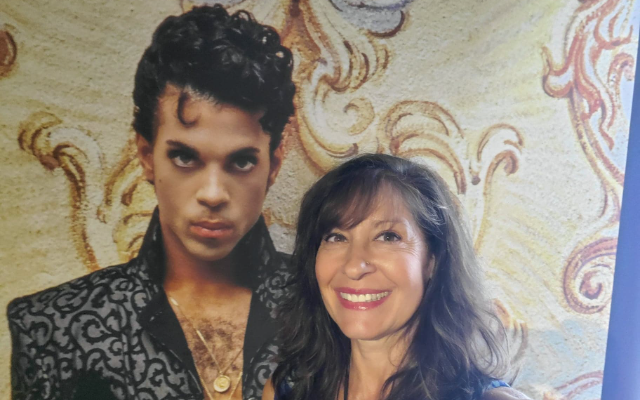 Hi this is Leslie Harris, and I went to see Prince: The Immersive Experience. Not gonna lie, I was a bit underwhelmed.

I thought the exhibit was a bit ‘dry.’ my husband asked me what I expected, and I couldn’t put my finger on it so I’ve been thinking about it.

I’ll tell you the highlights first:

You can sit on a motorcycle like the one that Prince rode in the movie and on the album cover Purple Rain, and have your photo taken. (with your phone, but even if you’re by yourself, one of the employees will take it for you)

There’s a floral suit that Prince wore on the Purple Rain tour, and there’s the Cloud Guitar that he used in the movie. There are also some great photos of Prince as a young boy, and with his first band, as well as some of his fascinating history.

There was a short medley of clips of Prince being interviewed by people like Larry King and Arsenio Hall. I would have liked more.

What I they could have done better:

The exhibit left me wanting more, wanting to delve deeper into his music and also into his history. The exhibit takes about an hour to tour.

Prince: The Immersive Experience is happening in a space at 520 North Michigan Avenue in Chicago, through October 9th. Find out more and get tickets HERE