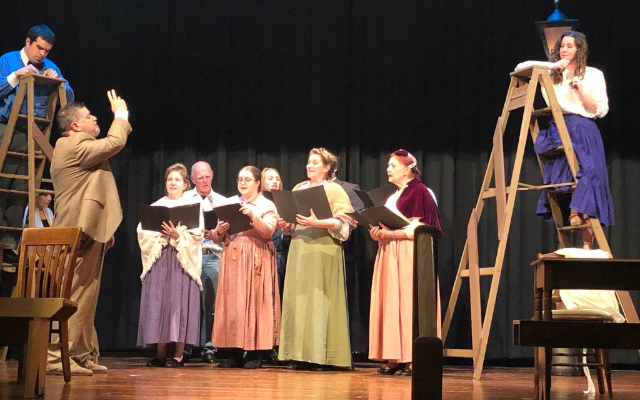 The Pulitzer-Prize winning play Our Town opens tonight at the Lincoln Center in Downers Grove, and continues throughout this weekend and next.

“This play is called Our Town”. Those are the first spoken words of Thornton Wilder’s play. One person. On a darkened stage. No scenery. No set.

A simple, elegant, gentle nudge to the imagination. Exactly what Wilder intended for us now when he wrote them decades ago.

But what’s it about?  The meaning of life and all that. Sure. But more. Much more. Like, what and where is the intersection of life and being human. You know simple stuff.

One actor mentioned the other day she learns her lines washing dishes. Thornton Wilder would be proud of that.

“Our Town demonstrates in the most gentle way, the most celebratory way, how difficult it is to be a human being. “

“Grove Players is a community theater that’s been around since 1936, in Downers Grove, performing at the Lincoln Center.  The group does three shows a year—normally a mixture of classic plays, comedies, and experimental. And this fall it’s a real classic. Our Town…originally written at about the same time that Grove Players did its first shows.

The Lincoln Center is at 935 Maple Avenue in Downers Grove. Find out more and get tickets HERE