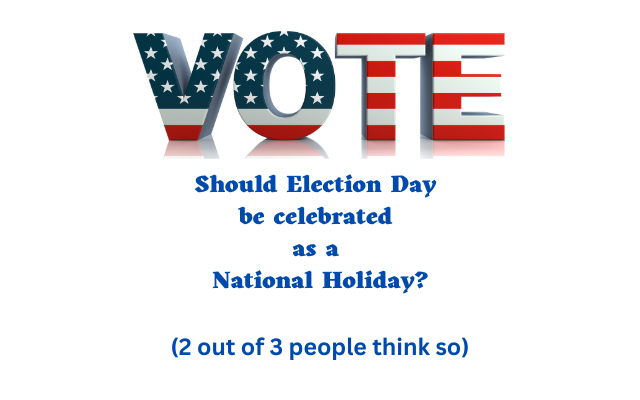 It’s Election Day, so get out there and vote if you haven’t already.  A lot of people did it early again to avoid standing in line.

So here’s the same question asked every Election Day:  Should it finally be a federal holiday to make voting easier?

A new poll asked thousands of Americans, and 66% said YES, Election Day should be a holiday.  Another 14% aren’t sure, and 20% are opposed to the idea.

If you don’t get the full day off, should you at least get an hour or two of PAID time to go vote?  Almost as many people support that idea . . . 65% said yes.

And finally, which day of the week would be BEST for Election Day?  It’s always on a Tuesday, but would another day be better?

If it had to be another day, the top choice would be a Saturday, 13%.  Sunday and Monday are next at 7% each, and Thursday is last with 4% of the vote.