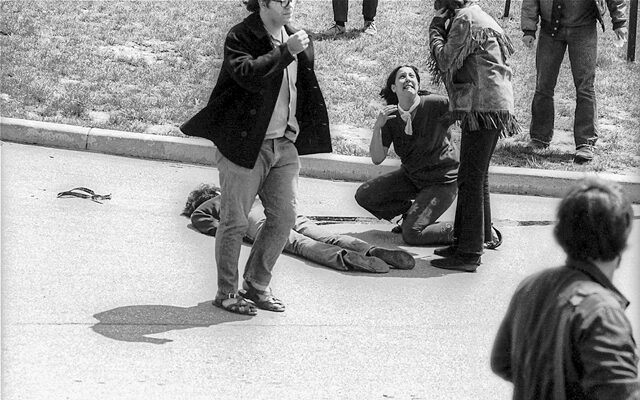 This is a weird day for me. A day I always feel sad and also a day that I can never forget! May 4th 1970, 51 years ago I was a student at Kent State University in Kent, Ohio. Kent not a hotbed of protest, but a midwest teachers college and known as party school! Even so, there had been 3 days and nights of protest over President Nixon’s decision to widen the Viet Nam war by invading Cambodia. The ROTC building had been burned to the ground on Saturday night. Monday the 4th there was another demonstration on the commons to protest the invasion and the also the presence of the National Guard on campus.  The guard had dispersed the crowd from the commons and they had retreated up over Blanket Hill past Taylor Hall. The guard followed and at one point even turned and started back up the hill when all of sudden they turned back and began firing into the crown below. Twenty-eight National Guard soldiers fired approximately 67 rounds over a period of 13 seconds, killing four students and wounding nine others, one of whom suffered permanent paralysis. Students Allison Krause, 19, Jeffery Miller, 20, and Sandra Scheuer , 20, died on the scene, while William Schroeder, 19, was pronounced dead at a nearby hospital in Ravenna shortly afterward. There has never been an explanation as to why the guard turned back and fired on the students who were retreating away from them! I arrived a minute or two after the shootings. An ambulance was just arriving and was picking up one of the students. People were still running around, it was chaos and I have to say it was the most surreal event of my life. This changed the entire anti-war movement and the sentiment of the country about the war and the governments response. Students had been assaulted before by police for anti-war demonstrations, but no one had been killed for expressing their displeasure at the war.  Neil Young’s lyrics from “Ohio” ring in my head:

Should have been done long ago

What if you knew her and
Found her dead on the ground?

How can you run when you know?

I’m including a link from Wikipedia on The Kent State Shootings and if you scroll down to eye witness accounts you’ll see two names you probably will recognize: Chrissie Hynde of The Pretenders and Gerald Casale of Devo. Both were students at Kent State and witnessed the shootings. I speak at length about this event my book as well: Doin’ The Cruise: Memories From A Lifetime in Radio and Rock & Roll.

I feel it’s important to remember this event not only because it was such a life changer for me, but for so many others……Peace

One of These Nights Passes!