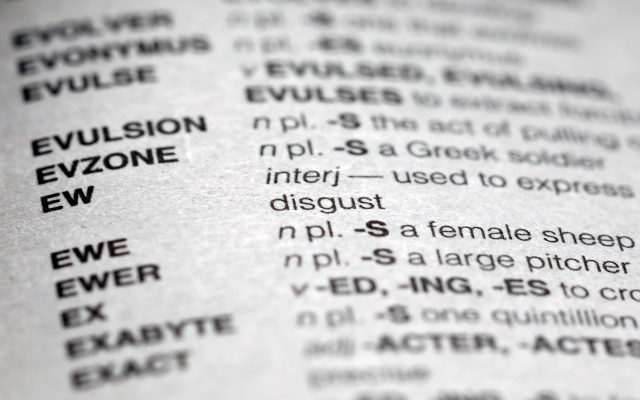 A company called U.S. Captioning does the subtitles for live events on TV. They also do an annual list of the most MISPRONOUNCED words of the year.

They polled a bunch of newscasters and announcers to find out which words they had trouble with. Here are a few words you may have mispronounced in 2022 . . .

1. Chicxulub (CHICK-choo-loob). A crater in the Gulf of Mexico caused by the asteroid that scientists say likely caused the extinction of the dinosaurs.

3. Edinburgh (ed-in-BRUH). American news anchors were criticized for mispronouncing it during coverage of Queen Elizabeth’s memorial.

4. Negroni sbagliato (ne-GRO-nee spah-lee-AH-toh). An alcoholic beverage, which went viral on social media thanks to “House of the Dragon” actor Emma D’Arcy. It’s a Negroni with sparkling white wine or Prosecco instead of gin.

6. Ohtani rule (oh-TAHN-ee). A new MLB rule named after Shohei Ohtani, which allows a pitcher to remain in a game as the DH after leaving the mound.

8. Zaporizhzhia (zah-POH-reezha). The Ukrainian city which had Europe’s largest nuclear power plant. It was shut down in September.

10. And finally, the singer Adele, who just informed the world that her fans have for years been mispronouncing her name. It’s “uh-DALE” not “ah-DELL.”