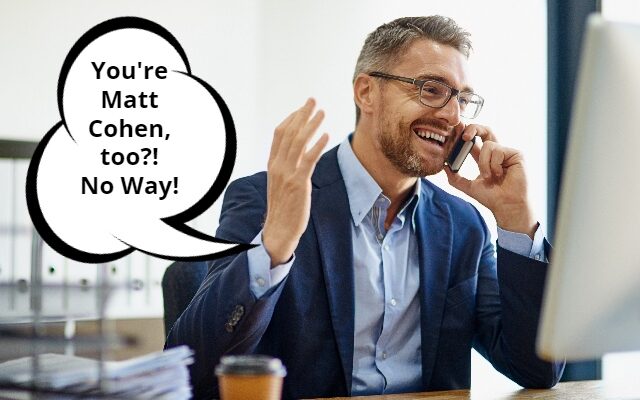 If your name is Matt Cohen . . . first, congrats for being namechecked on our website! But also, there’s a club you might want to join!

Back in 2016, a guy in Philadelphia named Matthew Cohen decided to look up other “Matt Cohens” on Instagram and invite them to a big group chat. For the past six years, more and more Matts have joined.

It’s called “Matt Cohens of I.G.”, and DOZENS of Matts post in it all the time now, mostly just updates about their life. But unlike social media, the rule is they have to be 100% SUPPORTIVE of each other all the time.

an update in the years-long instagram group i’m in of people who have the same name as me. pic.twitter.com/SDOtkezhvE

They even celebrate the accomplishments of Matt Cohens who aren’t in the group. For example, a guy named Matt Cohen made it on “Jeopardy” in 2017. And there’s an actor named Matt Cohen on “General Hospital” right now.

That Matt actually just joined the chat after hearing about it this month. So now they’ve got a celeb, and more Matts have been asking for invites too.

If your name isn’t Matt Cohen, you’re out of luck. But you could always start your own group chat. A recent poll found 1 in 4 people know someone . . . or know OF someone . . . with the same name as them.