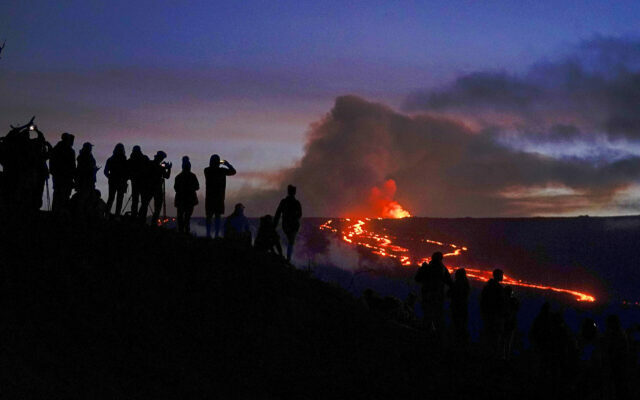 FILE - People watch and record images of lava from the Mauna Loa volcano Thursday, Dec. 1, 2022, near Hilo, Hawaii. Officials monitoring the Mauna Loa eruption on Hawaii's Big island said Wednesday, Dec. 7, the lava flow moving toward state Route 200 has slowed. They said they could not predict when, where or if the lava flow would cross the highway. (AP Photo/Gregory Bull, File)

You can always count on tourists to tick off the locals, no matter where they are. Here’s another example!

Hawaii is having a big influx of visitors thanks to the two volcanos erupting right now. And Native Hawaiians are upset because people keep throwing MARSHMALLOWS at the lava.

Volcanoes are considered sacred by a lot of people in Hawaii. So it’s seen as disrespectful.

The mayor of Hawaii’s Big Island said it might be a social media thing, and people are doing it for the ‘gram. But he’s also worried about tourists getting too close to the lava, where they might get hurt or need to be rescued.

He’s now looking at upping the penalties for trespassing in those areas. Three tourists who got caught too close to the lava this week are facing $500 fines, or up to 30 days in jail for it.

So if you’re heading to Hawaii to see the eruptions, officials would like you to please leave your marshmallows at home.