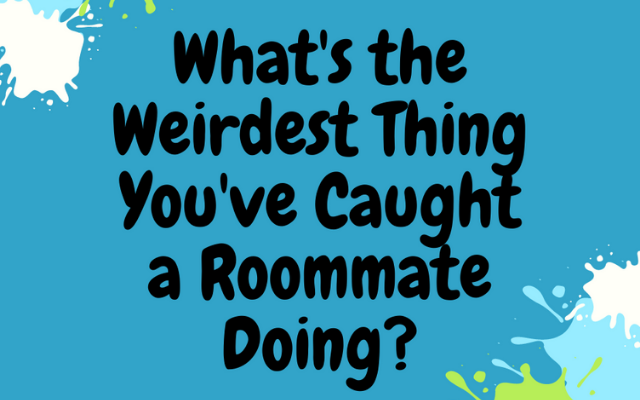 Fortunately the weirdest roommate thang that happened to me, happened after my roommate moved out.  I ended up a year later working with this person again and he started walking into the Radio Station with my old clothes on?  I was like, dude, that’s my coat.  Oh, I must’ve packed it by accident…Really?  Not buyin’ it.

How about you?  Here are some of the funniest answers we’ve seen . . .

1.  Someone found their roommate lying on the kitchen floor making snow-angels.  And when they asked why, he said he was just getting himself dirty before he took a shower.

2.  Someone got home from work early, and found their roommate playing video games in nothing but tighty-whities and a motorcycle helmet.  Yes, it was a racing game.

3.  Quote, “I caught my roommate pouring a giant pot of beans into the toilet.”

4.  In a place with two showers that weren’t being used, someone caught their roommate washing her hair in the kitchen sink . . . without taking the dirty dishes out . . . and she was naked.

5.  (Careful)  Quote, “I walked in on my roommate’s girlfriend shaving his [butt] for him.”

6.  A woman caught her roommate using her hair dryer to dry off his junk.

7.  Quote, “My roommate would occasionally sleep in the fetal position, but upright on his knees.”  So they nicknamed him “The Snail.”

8.  A guy was caught licking a plate clean and putting it back in the cupboard.