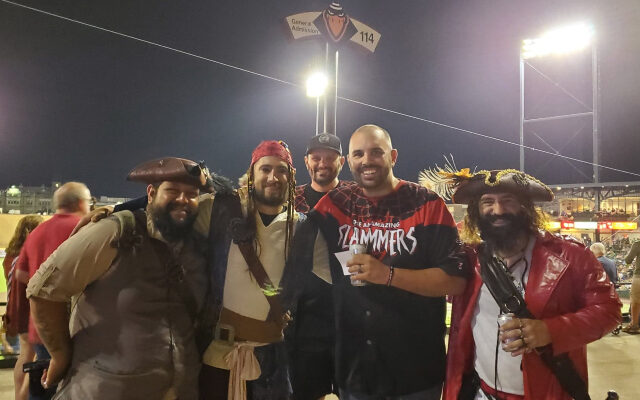 They aren’t just any pirates! They are the Pirates of the Canal — and they’re awesome!

On Friday night, I was at the home of the Joliet Slammers in downtown Joliet, enjoying an evening of baseball and beverages and a gorgeous Summer night. I noticed a pirate throw out the first pitch and had two thoughts. First…that dude looks awesome. B…not a bad throw!

I went on with the evening, talking with family and friends as enjoyed the game in memory of my father whom we lost in 2021. The game was meant as a fundraiser for the JDRF in his honor. Since I’m from Lemont, there were quite a few Lemonters there to remember my dad…more than I even thought!

As coincidence would have it, the pirate that threw out the first pitch, Capt. Sal (a.k.a. Larry) and his mates are also from Lemont! I also learned that one of the other pirates, Dan, had also recently lost his father. We all bonded pretty quickly. Then I asked why these grown ass men were dressed as pirates in public. The answer to that is quite touching, actually.

They are a charity group dedicated to the memory of their friend Rob Themmel, who started fundraising using the pirate theme a few years back. He passed away in 2019, so the Pirates of the Canal continue to raise money for local charities…dressed as pirates! I freakin’ love it.

They host an annual pirate pub crawl in Lemont, as well as other events throughout the year.

If you aren’t having fun trying to do a little good in this world…what are you even doing?

Keep it up POTC. Can’t wait to join you in October!