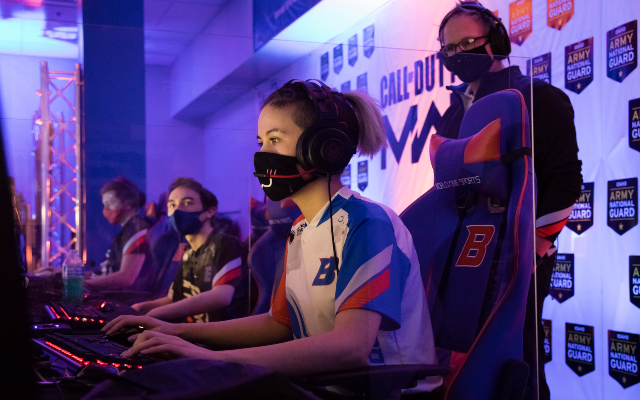 Boise State esports coach Doc Haskell talks to students in the control room during an esports match in Boise, Idaho, on Thursday, Mar. 4, 2021. Colleges and universities rushing to invest in the booming arena of varsity esports are overwhelmingly committing opportunities and scholarships to male players, according to data collected by The Associated Press. Boise State was among the more equal schools in the AP's survey, with 16 male players, five female players and three who identified as nonbinary.(AP Photo/Otto Kitsinger)

It’s the trend around the country. University sponsored eSports squads. And the University of St. Franics is Joliet is the latest school to dedicate resources to it’s own eSports program.

To my knowledge, USF is the only school in area offering eSports besides Roosevelt University in Chicago (correct me if I’m wrong!).

Its funny too because the very first thing schools say about their new eSports teams is always in defense of it to people who think it’s a bad idea.

What’s bad about fostering teamwork, leadership, strategic and critical thinking and creativity? Those are qualities that we all accept as important in every aspect of life, and that are fostered in eSports participation.

You have to understand that eSports is not the same thing as mindless video game playing. Once you are able to take that mental step, then you’ll realize the potential here, not only for students, but for schools to market themselves as destinations for a very large group of kids. Competitive video gaming is HUGE, not only in participation, but in a business sense. Professional sports leagues like the NFL and NBA have stakes in eSports, and eSports tournament viewership is in the millions. Schools as large as Oklahoma, Boise State and Ohio State all sponsor eSports teams.

USF is currently trying to decide which association to join to begin interscholastic competition. They already have started to build their dedicated eSports facility and recruit players.

A few years ago (2018), I actually interviewed Ed Cann, the eSports coach at Oswego High School about how the IHSA is treating eSports at the high school level.

I’m happy to see one of our local universities extend this opportunity to students who can’t necessarily run the fastest or jump the highest, but still have that competitive edge.

18 hours ago
Connect With Us Listen To Us On