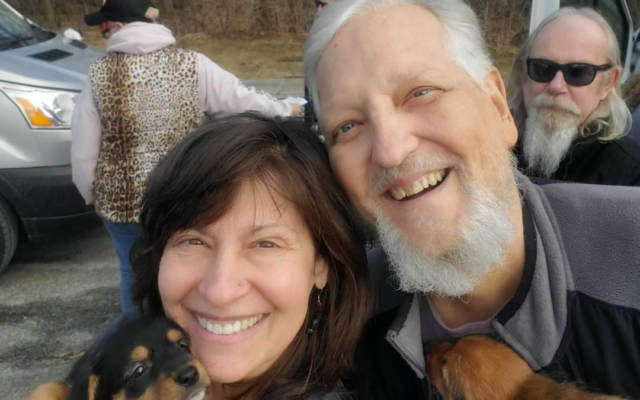 Hi this is Leslie Harris. I was not late to work, but I was cutting it pretty close. I had a really good reason. Today we said goodbye to my old friend Brian.

I’ve known Brian for a really long time, but I never really got to know him until about 2 and 1/2 years ago. I ran into him, and told him about the volunteer work I do, rescuing companion animals. Brian told me that he was interested in getting involved. Boy did he ever.

Brian became one of our most reliable and valuable team members. Our team transports animals every Tuesday from high kill shelters to no kill rescue agencies, and Brian was there every week. Except when he wasn’t.

Brian had been battling prostate cancer for a couple of years, but he was feeling pretty good, and worked hard with the animals, walking dogs, lifting heavy crates, etc. He even fostered a few litters of cats and kittens. A lot of people didn’t even know that he had cancer.

Brian knew that his life might be shortened, and he really lived life to the fullest the last few years. He had a motorcycle, and he traveled cross country, and even rode a dangerous trail called Tail of the dragon, twice! He also went to Savannah, New Orleans, Sedona, Puerto Rico among many other places.

We shared a love of rock and roll, and a love of concerts, and Brian was often competing with me to see who could see more bands. Every time I saw him wearing an Aerosmith t-shirt I told him I was going to steal it from him.

We all agreed that Brian would want us to celebrate his life, instead of focusing on his death. In honor of my dear friend Brian, I will continue to live my life to the fullest, and I hope you will too.