Ever Wanted to Fly in a World War II Bomber?! Now’s your Chance! 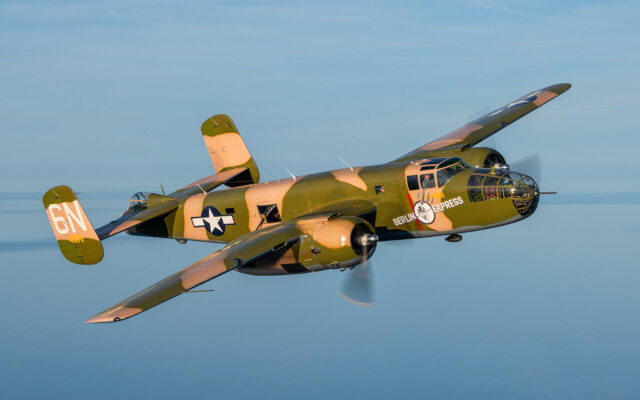 The Experimental Aircraft Association (EAA) is bringing the historic B-25 Mitchell — aka the Berlin Express — from World War II to Aurora and inviting you for a ride!

The North American B-25 Mitchell is a medium bomber from the Second World War. This powerful twin engined and twin tailed aircraft was used by every branch of the United States military. It is the only US military aircraft to ever be named after an individual, air power advocate General Billy Mitchell.

In March of 1939 the United States Army Air Corps put out the call to aircraft companies for a medium bomber that was able to carry a bomb load of 2,400 pounds for 1,200 miles at a speed of 300 mph. North American delivered a prototype named the NA-62. The Army Air Corps was impressed with the aircraft’s performance and immediately ordered the aircraft, now designated B-25.

The first B-25’s became combat ready in early 1942, just in time for a very daring plan after a devastating Japanese attack on Pearl Harbor. The idea was to load 16 bombers onto the deck of the USS Hornet and sail as close as they could safely get to Japan. Then, when the time was right, launch off of the carrier and bomb Tokyo as well as military installations in the area. The mission would be led by famous aviator James H. Doolittle. On April 18th, 1942 the task force was spotted early, and even though the odds were against them, the 16 bombers roared down the deck toward history. The planes hit their targets and most ditched off of the coast of China after the raid. With one daring mission, Doolittle’s Raiders lifted the morale and spirits of everyone back in the United States.

This B-25 Mitchell aircraft has been on display in the Eagle Hangar of the EAA museum for decades. Now, fully restored in her silver screen markings, “Berlin Express” is ready for her next mission. One to honor our World War II veterans as well as inspire a new generation of aviation enthusiasts.

Want to know what it’s like before you go? Leslie Harris and I will be taking a ride tomorrow! Stay tuned for videos!!