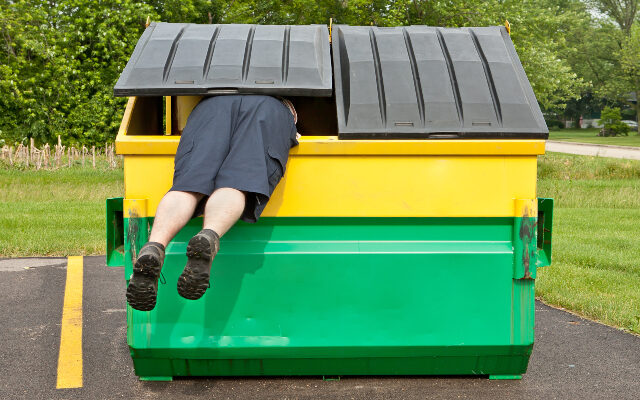 There was a time when a career in JUNK meant that you were a garbage man.  Now, people can earn a living by doing garage sales on eBay . . . “upcycling” old stuff on Etsy . . . “picking” antiques from hoarders . . . and buying abandoned storage units in the hopes of uncovering valuables.

Her name is Tiffany She’ree, and she first got into dumpster diving after watching some YouTube videos about it back in 2016.

She mostly targets commercial trash . . . like the dumpsters behind stores like Victoria’s Secret, Bed Bath & Beyond, Party City, and Ulta.  They sometimes toss new or returned merchandise that they can’t sell for whatever reason.

Tiffany looks for anything that SHE could sell . . . and apparently makes enough to help support her family.  If that seems hard to believe, check out her TikTok feed, @DumpsterDivingMama, where she shares her “scores.”

Dumpster diving is technically NOT illegal, but a lot of dumpsters are on private property, and if there are “no trespassing” signs the store could come after you and you could be fined.  That said, it’s unlikely anyone will care if you don’t damage anything and you don’t make a mess.