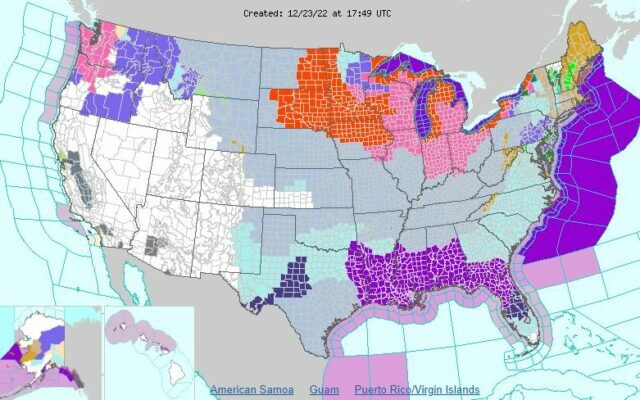 It might not seems to terrible on your block, but when you take into account the impacts of this storm on a national level, we’re talking about some historic numbers!
The National Weather Service says more than 200 million people are under winter weather advisories or warnings – covering about 60% of the country.
The weather has also canceled thousands of flights and knocked out power to nearly half a million homes.

As of 9:30 AM ET December 23, 2022: Over 200 million people, or roughly 60% of the U.S. population, are under some form of winter weather warnings or advisories across the U.S. today. Be sure to check https://t.co/VyWINDBEpn for your latest local forecast and impacts. #Winter pic.twitter.com/CwzQvCXv1j

More than 4,400 flights have been cancelled as the storm brings snow, heavy winds, and freezing cold to much of the U.S.
It’s not just air travel that’s being disrupted – Amtrak has suspended train service for many Midwest or cross-country lines.
Some of the coldest temps were recorded in Denver, where it reached -24 degrees on Thursday. Even down in Louisiana they are experiencing temperatures FAR below normal. So much so that radio station The Eagle 98.1 out of Baton Rouge is having some fun with it. The answers are great!