Another Hockey Championship for the Chicago Steel! 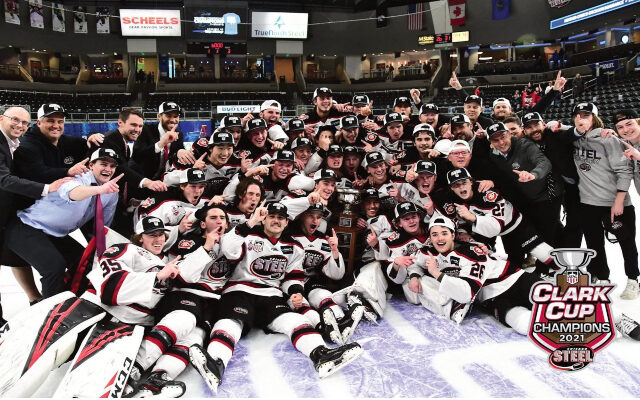 Old habits die hard. But, when your habit is winning ‘ships, that’s OK!

The Chicago Steel, who play up at the Fox Valley Ice Arena, put another boat on the water over the weekend, defeating the Fargo Force 3-1 in game four of the series. This is the second time the Steel have won a luxury yacht! Their previous sea liner was back in 2017. That’s right, hockey fans, that’s two Great Lakes freighters in the last four years!

And how about this…Chicago became the first team since the 2012-2013 Dubuque Fighting Saints to win the Anderson Cup (regular season title) and Clark Cup in the same season!

And hey, if you want to check out how much fun Chicago Steel games are (and trust me, they are a ball!), you can grab Season Ticket Plans for the Clark Cup Champion Chicago Steel on sale now by calling 855-51-STEEL or emailing [email protected].

Through Friday, May 28th, all fans who make a deposit on a season ticket package will receive two free playoff t-shirts while supplies last, one commemorating the 2019-2020 Anderson Cup Champions and one celebrating the 2021 Clark Cup Champions.

Who who wouldn’t love some free swag commemorating their latest paddle steamer!?

Can’t wait for them to win back to back cable ferries, buddy!