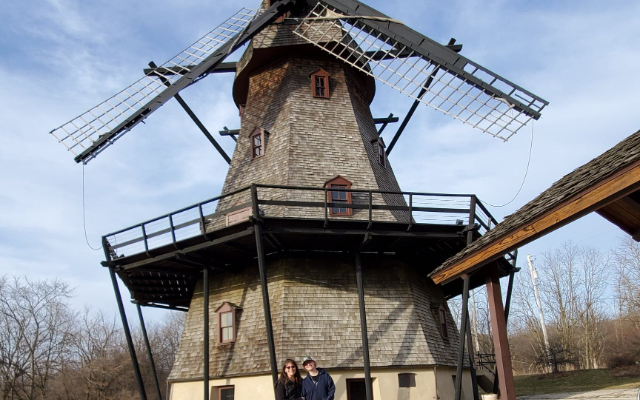 Hi this is Leslie Harris, and last weekend, my oldest and I took a trip to the Fabyan Forest preserve in Batavia.

The weather was great, so we got some food and ate at a picnic bench near the Fox River. We then went and explored the area, which has lots to offer.

It currently belongs to the Kane County Forest Preserve District, but it was the estate of George and Nelle Fabyan. They were quite wealthy, and George liked having unique things, like the windmill you see in this picture, which is on the east side of the river.

It was originally constructed and operational in what is now Lombard, near the intersection of Meyers and 16th. George paid quite a bit of money to have it moved and refurbished on his own land. Some believe that he used it to grind flour to make bread for his bears. Yes, he had bears.

There is a foot bridge near the windmill, and on the west side of the river is the house where George and Nelle lived, as well as a Japanese garden and the bear cage. There’s also a lovely walking / bike path on the east side of the river. We found out the hard way that much of the west side is private property, and had to walk quite far out of our way!

I’m not sure if things will be open this year due to the pandemic, but even if you can’t go inside the buildings, and garden, it’s still an enjoyable day. Check their website for updates.