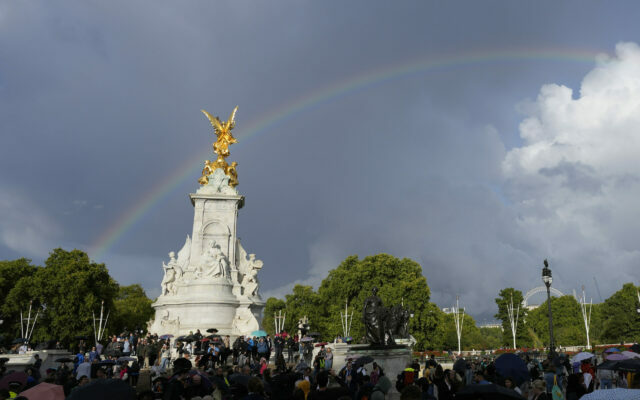 People gather outside Buckingham Palace in London, Thursday, Sept. 8, 2022. Buckingham Palace says Queen Elizabeth II has been placed under medical supervision because doctors are "concerned for Her Majesty's health." Members of the royal family traveled to Scotland to be with the 96-year-old monarch. (AP Photo/Frank Augstein)

(Scotland)  — According the MetroSource News Network, Queen Elizabeth has died at the age of 96. The Palace said her Majesty the Queen died peacefully with her family by her side. Her son Charles, the Prince of Wales, will assume the throne and will go by King Charles the Third.

King Charles says the death of his mother Queen Elizabeth is a moment of the greatest sadness for him and his family members.  In a statement, Charles said they mourn profoundly the passing “of a cherished Sovereign and a much-loved mother.”  He said he knows her death will be felt deeply throughout the country and by many people around the world.  Charles added during this period of morning, he and his family will be comforted by the knowledge of the respect and affection in which the Queen was held.

Queen Elizabeth is survived by her four children, Charles, Anne, Andrew and Edward.

When King Edward the Eighth abdicated the throne to marry Wallis Simpson, Elizabeth’s father became King George the Fourth, making her first-in-line to the throne. Her coronation was the first to be televised in England and it was watched by an audience of 20-million people worldwide. In September of 2015, Queen Elizabeth became the longest-reigning British monarch in the country’s history.

The Queen was crowned at the age of 25 and her reign lasted over 70 years. She was the longest-lived British sovereign and she visited more than 115 countries. Only five other British kings and queens have ruled for 50 years or more. Elizabeth gave royal assent to, or passed, more than 35-hundred Acts of Parliament after passage by the houses of Lords and Commons. She has been served by more than a dozen British Prime Ministers, including Winston Churchill, Margaret Thatcher, and as of just this week, Liz Truss.