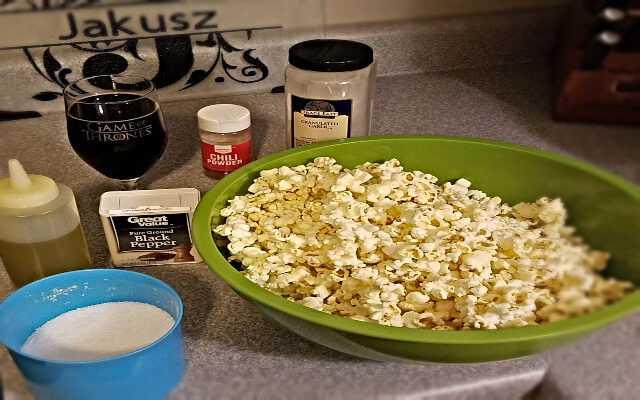 I make an ungodly amount of popcorn at home. It’s kind of a problem, actually.

Seriously, it is my favorite snack, and I make it several times a week. It’s so easy to make and you can customize it for whatever mood you are in, but I usually make it just one way…seasoned with many of the same spices used in chili.

Is that weird? I don’t know, but it sure does taste good!

So after making some popcorn (usually too much for my Whirley Pop™ to handle because as I stated before, I have a problem), this is what I add to it:

Oil/butter (I use olive oil most of the time, but it’s fun to experiment with different oils that bring different flavors to the party)
Salt (you can sprinkle it on the popcorn in the bowl, or a better method would be to sprinkle it over the kernals as it pops for more even distribution).
Pepper (use freshly ground if you can, but the pre-ground is fine, whatever).
Chili Powder
Garlic Powder
Cumin

How much should you use? I don’t know…i just wing it! Use however much you want! I go pretty heavy on the pepper, but that’s just me.

I’ve even been known to sprinkle a bit of liquid smoke on there, which is a fantastic touch if you have it.

I have recently updated my recipe to use smoked paprika in lieu of the chili powder to tone down the spice and add smoky flavors.