The Story of the I-80 Chicken Lady! 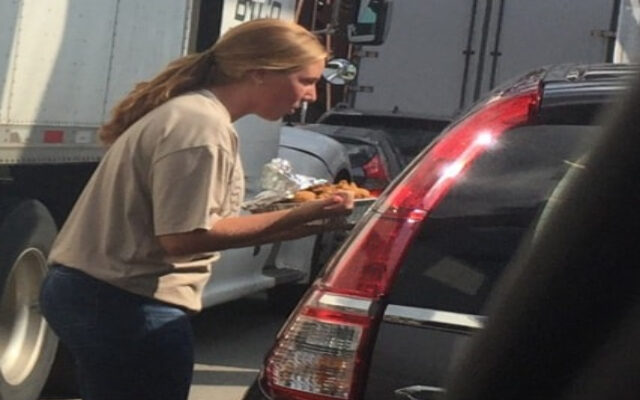 As dozens – nay hundreds – of Joliet drivers can attest to, Friday afternoon was BRUTAL.

Traffic was at a standstill for more than two hours because of a semitruck fire around 11:15.

My mother-in-law happened to be one of those drivers and, since I’m on the radio and possible knew more than the average citizen (I did not), she asked me what was going on as she had seen, and photographed, the smoke plume from what we soon found out was a large truck fire.

Then word started getting out how serious it was, and I told my MIL that she may be there for quite a while!

She told me people had started to get out of their cars to stretch their legs and authorities had to tell them to get back into their vehicles. I immediately demanded photographs to share with our followers on social media!

I told my MIL to keep sending me photos/videos of anything going on out there. She soon sent me this picture, which you may have seen on your social media feeds. It was Kiley handing out Chicken-N-Spice chicken chunks to stranded drivers!

Thanks to the power of social media, I was able to track her down and get the backstory. Turns out she was bringing lunch back to her office to celebrate an early National Bosses Day…but instead of zipping back to the office, she was caught in the gridlock. And instead of staying in her car, she decided to feed her fellow gridlocked drivers.

In partnership with our buddies at The Dock at Inwood in Joliet, we are buying her office lunch as a thank you for her kindness to others!

What a cool story!